...and some lines and a sketch XD(from october/november or so) 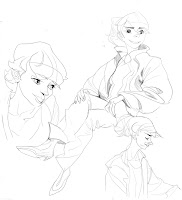 Got plenty of stuff to post, but i don´t with what i could start. Its so boring anyway atm.
And cause i don´t want to make this post completly pointless i will show you some nice mangas i´ve read lately and that are quite nice imo.
All of these are at least (as far as i know) availble in Germany, France and Italy.

Well, i´ve been following this series for quite a qhile now, but was always afraid to buy book 19... due some licence Problems it won´t be published here any longer, what makes me pissed a little bit (guess i will have to import the books from now on). This Series is awsome.

What i personally like are (of course) the drawings (they are strong and dynamic) and mainly the character developement. Ryo isn´t really likeble at all, i totally disagree with his behaviour and the things he is doing most of the time, yet i want to know how the story goes on.

This should be widely known, Taniguchi gots a lot of praise for his work for a while now. I recently saw it in a bookstore and thought i could give it a try.

I like the slow storytelling , there is no haste and you have a lot of insight to the characters personalitys. Drawings are brilliant aswell...

A young girl and her talent for Ballett, i have just the first book, but i really like it so far. The drawings may look a bit rough, but i´ve rarely found an comic that carrys so much emotion like this one (i mean, it wa soverwhelming sometimes unfortunatly i havn´t found a good example on the net, and i don´t want to rip my book apart while scanning ;). The Story is for mature readers even though the main Character is a young girl. I´m curious how the series will develope :>

Email ThisBlogThis!Share to TwitterShare to FacebookShare to Pinterest
Labels: off-topic 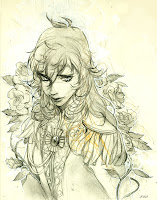 Also serveral month old, i planned to make some lines from it. But even after such a long time i still think i should better let it in this sketchy form ( though i could have fixed her feet, but well...). Don´t want to ruin the dynamics.
Flat colours rule btw.

Sorry for not replying comments lately, i´m braindead from watching to much キーボードクラッシャー videos on nicovideo XDDD
at February 07, 2008 7 comments:

Email ThisBlogThis!Share to TwitterShare to FacebookShare to Pinterest
Labels: junk 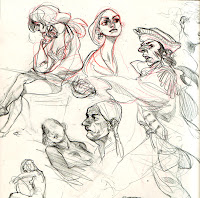 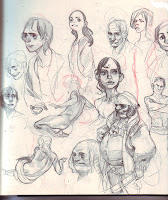 Internship is over ( T_T it was sooo nice ), Homework is done (Yesss)...I´m officially free now...well at least for a month, next semester is my last. And i still have to prepare my diploma porject :(

But well, i try to get back to the groove, me needs to do more sketches... 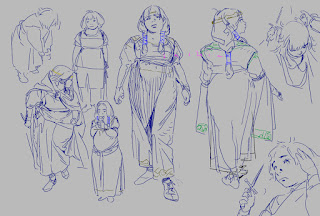